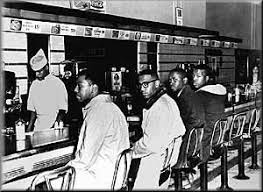 dynamic program to the Richmond community. This interactive theatrical event is a simulation of the year 1960. An actor portraying an African American college student will conduct a training session for people interested in joining a sit-in to protest racial segregation. The student speaks about protests and coaches members of the audience in the philosophy and tactics of nonviolent action. Appropriate for age 10 through adult. In preparation for this program you might want to read the book March by John Lewis.

The Vermont Humanities Council 2019 Vermont Reads book selection is the graphic novel March: Book One, the first in a trilogy by civil rights icon John Lewis in collaboration with co-writer Andrew Ayden and graphic artist Nate Powell. It tells the story of Lewis’s coming of age in rural Alabama and early life of civic activism. Lewis, who was greatly inspired and influenced by Martin Luther King Jr., is considered one of the big six leaders of the civil rights movement and an early adopter of the nonviolent protest tactics that were instrumental in the desegregation of the South. Lewis has served in the US Congress since 1987. Thanks to a grant from the Vermont Humanities Council the library has many copies of March: Book One on hand to distribute to the community. Come by and pick up a copy.